Roundtable on The Size and Shape of the State

Norman Gemmell presented some initial results from a joint project with Derek Gill of NZIER on the size and shape of the New Zealand state over the last century or so, to an invited audience of guests with experience and interest in this area. The research is gathering data on various ‘lenses’ through which the state sector in New Zealand may be measured, with a key focus being whether and how the size of the state shrank (temporarily or sustainably?) after the major 1980s reforms. A lively discussion followed with several knowledgeable contributors including Ruth Richardson who shared her experience as finance minister during key points of this episode.

A set of slides from Norman and Derek’s presentation is available here NZPC Roundtable_June 2016, and more details of the project are reported elsewhere in this Newsletter

Special thanks are due to Patrick Nolan of the Productivity Commission for organising the roundtable event, the NZIER Public Good Fund for sponsoring this research, and Loc Nguyen for excellent research assistance.

You can find the NZIER’s larger interactive database, including public finance-related data series produced by this project, at www.data1850.com 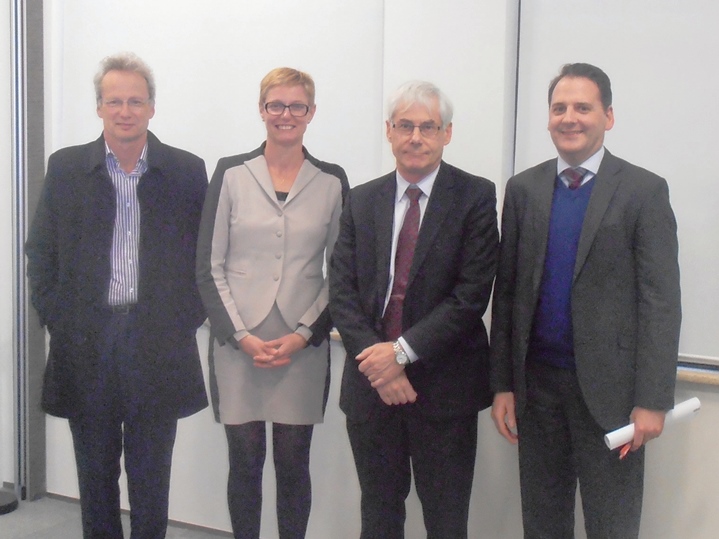 As in previous debates, the positions in our final debate were randomly allocated by organisers, with Mr. Derek Gill (Principal Economist, NZIER) speaking for the motion and Dr Bill Rosenberg (Economist and Director of Policy, NZCTU), Ms Fiona Ross (Deputy Secretary, Budget and Public Services, The Treasury) commentated the debate. There were a number of questions fielded from the large audience. Both speakers presented strong cases, and much of the audience found the case against the motion slightly more compelling.
View debate slides 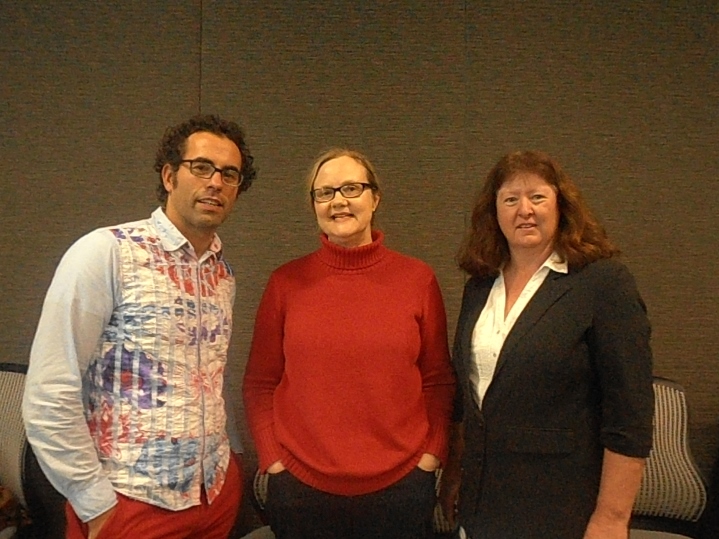 May 2015: Economic evidence should play a greater role in health policy evaluation, 20 May 2015. 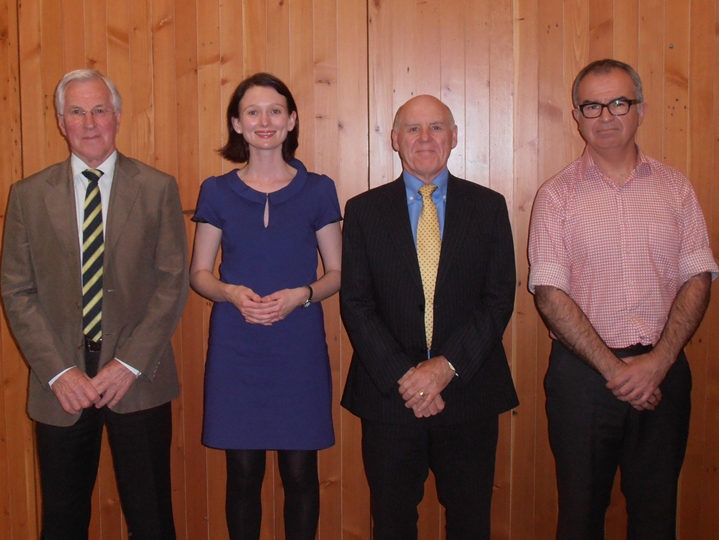 April 2015: hosted by the Government Economics Network and the Chair in Public Finance, the first debate of this years series event was on the motion:
Today’s policy settings unfairly favour the baby boomer generation.

Debate organisers allocated positions for the two speakers in advance of the debate. Ms. Becky Prebble was charged with arguing for the motion. Ms. Prebble touched on housing, tax and education leading to entry in the labour market as key policy areas which definitely favoured Baby-Boomers, compared to the conditions faced by generations X and Y.
Dr Simon Chapple countered this, noting that the Baby-boomers were not unfairly favoured, as they too had to take care of the generation before them, as well as the generations after them. Dr Chapple highlighted the idea that this was essentially related to well-being outcomes, and touched on the various advantages and disadvantages across the generations.
Both Ms. Prebble and Dr Chapple, answered a number of insightful questions from the audience. Both arguments were strong, as was evident in the tie at the end of the debate.
View debate slides.

December 2014: hosted by the Government Economics Network and the Chair in Public Finance, this light hearted christmas event was on the motion:
This House Believes the Christmas Extravaganza is a Waste of Time and Money.

Andy Williams reckoned “Christmas is the most wonderful time of the year”. While a fine singer he was no economist, and so at this event two teams debated some of the lessons that economics provides on this season.
Given research published in the American Economic Review showing the deadweight losses of Christmas gifts, should people simply give cash instead? What rights should people who don’t enjoy Christmas (like the Grinch) have to negotiate this season away? And, more generally, is the Christmas extravaganza a waste of time and money?
Eric Crampton (Head of Research, New Zealand Initiative) and Patrick Nolan (Principal Advisor, New Zealand Productivity Commission) argued for the motion that the Christmas Extravaganza was a waste of time and money. However, they were ultimately defeated, through audience vote, by Bronwyn Croxson (Chief Economist, Ministry of Health) and Anne-Marie Brook(Principal Advisor, Treasury), who argued against this assertion. It was a fun afternoon, much enjoyed by all who attended.

Check out Eric’s blog post for his perspective on the event. 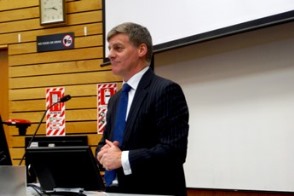 September 2014:The Chair in Public Finance was very pleased to host two public lectures on the future of the government’s finances after the 2014 general election, across two days in September.
On 1 September, Hon Bill English, Minister of Finance and Deputy Prime Minister presented ‘What will the economy look like under a National-led Government?’
Hon David Parker followed on 2 September presenting on what the governments finances would have looked like under a Labour-led Government.

June 2014: Hosted by Inland Revenue, The Treasury and the Chair in Public Finance,this two day conference explored issues around making tax easier, reducing the costs of administration and compliance, all while maintaining key objectives such as efficiency and fairness. The event was well attended by local business, tax advisers, academic and government officials alike. The speakers engaged the audience with insight into a wide range of areas from compliance to working with technology, and encouraged with lively debate from the audience.

Thank you to all of those able to attend.

Presentation slides are available to view through the agenda.

May 2014: Sponsored by the Chair in Public Finance and NZIER, My 2014 Budget was an engaging half-day event, providing valuable information and insight into the budget process. Norman Gemmell (Chair in Public Finance,Victoria University of Wellington) opened the day with a brief introduction, before the team from Treasury took over.

Simon McLoughlin (Team Leader, Fiscal and State Sector Management), Warwick White (Principal Analyst, Fiscal and State Sector Management) and Kamlesh Patel (Senior Analyst, Fiscal Reporting) gave a presentation on how the budget works, providing an overview of the budgeting process, an outline of the Budget cycle and a description of the budget documents and what these entail. for further information, see The Treasury website and NZ Budget App, available on android and Iphone.

The second session of the day was centered around the views of three respected commentators on the budgets that they would have designed. Brian Fallow (NZ Herald) started the session, followed by Phil O’Reilly (Chief Executive, BusinessNZ), and Stuart Nash (Executive Director, AUT and Labour candidate for Napier). The event was eloquently summed up and closed by Kirdan Lees (Senior Economist at NZIER).

December 2013: Thank you to those who attended our “It’s time…NZ adopted a social insurance approach to welfare” debate on Dec 2 from 4.00 – 5.30pm at Government Buildings, Victoria University.  The debate saw two strong presentations by Proponent Alison O’Connell and Opponent John Gibson, both drawing on numerous examples from the past and abroad. Norman Gemmell (Commentator) provided a summary with pros and cons from both sides. The audience was asked to vote twice – when asked who presented a more convincing case, the audience supported the proponent and when asked if the audience agreed with the proposition, the audience also voted in favour of the proponent.

November 2013: “It’s time…NZ extended charging for public infrastructure” debate was held on Nov 12 at PwC on The Terrace from 3.00 – 4.30pm. Geoff Cooper (proponent) and Peter Conway (opponent) made good use of argument and evidence mixed with some light-hearted presentation. Chris Money (commentator) gave a helpful summary of both arguments in additional to providing further insight. There was enthusiastic participation at question time. When asked on which speaker gave the most convincing presentation, it looked like an honourable draw. In a vote on whether the audience supported the proposition, the affirmative won, i.e. “It’s time…NZ extended charging for public infrastructure”.

October 2013: Strong cases for both sides were presented by Toby Daglish (proponent) and Grant Scobie (opponent). Lisa Marriott (commentator) gave a very helpful comparison of both arguments against a number of important criterea. At the end the audience voted clearly in favour of imposing GST on foreign-sourced internet goods less than $400. There seemed to be some agreement that the challenge would be the ease of implementation.

March 2013: Professor of Economics and Law at the University of California, Berkeley and the 2013 Robin Oliver Scholarship Visiting Lecturer in Tax Policy presented “International Tax Reviews and New Zealand’s Tax Working Group: What can we learn?” at the Public Lecture hosted by Victoria Business School.

March 2013: Sponsored by the Chair in Public Finance, New Zealand Institute for the Study of Competition and Regulation and Booksellers NZ, William Steel presented his research on GST on foreign retailers at the Summer Scholar Seminar.

These events enabled the Treasury to test its analyses and assumptions in the lead-up to the release of the Long-Term Fiscal Statement on 11 July, 2013.

August 2012: On August 28, 2012, at Old Government Building Lecture Theatre 1, the first Public Finance Debate invited Bryce Wilkinson to speak in favour of a government spending cap and Bill Rosenberg to argue against. After strong arguments from both sides of the case, Anne-Marie Brook provided an excellent summary as Commentator for the event. The Chair, Norman Gemmell, then asked the audience for their feedback and the majority raised their hands in favour of the idea of the government not having a cap on its expenditure.

September 2012: On 28 September, 2012, at Old Government Building Lecture Theatre 1, two lively presentations were delivered on whether New Zealand should go for a lower capital income tax rate. Michael Reddell, the Proponent, made the macroeconomic case that New Zealand’s economic performance would improve substantially if capital tax rates were cut like some Nordic countries. Robin Oliver, the Opponent, focused on the importance of taxing all income similarly, a system we inherited from Sir Roger Douglas (former Minister of Finance under Labour-led government). John Creedy, the Commentator, challenged both presenters to provide more evidence in support of their cases. Laughter went around the room as the presenters mixed serious debate with light-hearted humour. A show of hands indicated that the majority of the audience voted against reducing capital income tax.

October 2012: On 24 October, 2012, at Old Government Building Lecture Theatre 1, Paul Dyer (the Proponent) and Lew Evans (the Opponent) presented their cases on whether the New Zealand Government should sell 100%, or just 49%, of its SOE stake. A slightly different format this time round: the Opponent opened the debate with his argument in favour of the government’s current policy of selling just 49%. Lew argued that this would deliver many of the Boardroom and governance advantages of 100% share sales while also giving public servants important experience of working with large market-driven companies. Paul then delivered his stance that ‘full privatisation’ was preferable. Paul argued that the 49% sale option was merely a political compromise, and that the evidence from many studies backed the case for significant benefits from full privatisation. Arthur Grimes, the Commentator, summed up the two sides and noted that the favourable evidence on privatisation effects was typically based on ‘0% versus 100%’ comparisons rather than ‘49% versus 100%’. A show of hands indicated that the majority of the audience were not persuaded by the current government’s model: they voted clearly for the sale of 100% SOE shares, not just 49%.

November 2012: On 23 November, 2012, at Old Government Building Lecture Theatre 1, John Yeabsley (the Proponent) and Martin Lally (the Opponent) presented their cases on whether a discount rate of 8% for public sector projects is too high. Bronwyn Croxson (the Commentator) provided a summary of both sides. John argued that there were many examples of public sector investment decisions where the social rate of time preference, not the shadow price of capital, was the appropriate discount rate to use and this was clearly less than 8% – perhaps around 3-4%. Martin’s starting point was that the (weighted) average real cost of capital (WACC) was the best tool to use in setting the discount rate, and moved quickly to demonstrating that a range of reasonable parameter values for New Zealand produced a discount rate not very different from 8%. Bronwyn then brought a novel use of Lego people to illustrate her critique of both sides! A show of hands indicated a very evenly divided audience, perhaps evidence of the strong arguments by both sides.